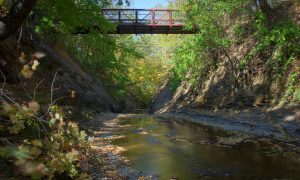 Parma is situated southwest of Cleveland, and comprises 19.7 sq. mi., bounded by Cleveland and Brooklyn on the north, Brooklyn Hts. and Seven Hills on the east, North Royalation and Broadview Hts. on the south, and Brook Park, Middleburg Hts., and Parma Hts. on the west. In 2010 Parma was the seventh largest city in the state of Ohio and the second largest city in Cuyahoga County after Cleveland. The tract that eventually become Parma and Parma Heights was surveyed in 1806 by Abraham Tappan of the Connecticut Land Company. The area’s first white settlers were the Benajah Fay family from New York State, who settled along the Cleveland-Columbus Rd. (now Pearl Rd.) in 1816. Designated Parma Twp. in 1826 the region soon became known as “Greenbriar” (also spelled “Greenbrier”), which referred to a weedy shrub common in the vicinity. “Parma” likely came from an identically named town in New York. During the 19th Century Parma residents worked mostly in Agriculture; a clock shop owned by Dudley and William Humphrey was the sole manufacturing operation. In 1911, following a dispute over Sunday alcohol sales, a portion of the township seceded to form the village of Parma Hts. On 15 Dec. 1924, Parma was incorporated as a village and in 1926 it adopted a mayor-council form of government. On 1 Jan. 1931, after a proposition to annex it to Cleveland was defeated, Parma became a city. At that time, it had a population of about 14,000. Consistent with a massive nationwide movement to the suburbs Parma’s population soared in the years following WWII. Between 1950 and 1960, the number of residents rose from 28,897 to 82,845, peaking at around 100,000 in 1970.  Many new residents had moved from traditional ethnic neighborhoods in Cleveland including Tremont and Slavic Village and provisions of the GI Bill assisted in their ability to purchase new homes in the suburb.   Parmatown Mall and Parma Community General Hospital opened during this period. Growth of Industry in the area paralleled the population increase, with corporations such as General Motors, Modern Tool & Die, the Union Carbide Research Center, and Cox Cable Television taking up residence.