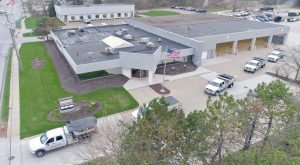 Akron is the fifth-largest city in the U.S. state of Ohio and is the county seat of Summit County. It is located on the western edge of the Glaciated Allegheny Plateau, about 30 miles (48 km) south of Cleveland. As of the 2018 Census estimate, the city proper had a total population of 198,006, making it the 119th-largest city in the United States. The Greater Akron area, covering Summit and Portage counties, had an estimated population of 703,505.
The city was founded in 1825 by Simon Perkins and Paul Williams, along the Little Cuyahoga River at the summit of the developing Ohio and Erie Canal. The name is derived from the Greek word signifying a summit or high point. It was briefly renamed South Akron after Eliakim Crosby founded nearby North Akron in 1833, until both merged into an incorporated village in 1836. In the 1910s, Akron doubled in population, making it the nation’s fastest-growing city. A long history of rubber and tire manufacturing, carried on today by Goodyear Tire, gave Akron the nickname “Rubber Capital of the World”. It was once known as a center of airship development. Today, its economy includes manufacturing, education, healthcare, and biomedical research; leading corporations include Gojo Industries, FirstEnergy, Huntington Bank, and Charter Spectrum. Akron is located in the Great Lakes region about 39 miles (63 km) south of Lake Erie, on the Glaciated Allegheny Plateau. It is bordered by Cuyahoga Falls on the north and Barberton in the southwest. It is the center of the Akron Metropolitan Statistical Area which covers Summit and Portage Counties, and the larger Cleveland-Akron-Elyria Combined Statistical Area. Located on the western end of the plateau, the topography of Akron includes rolling hills and varied terrain. The Ohio and Erie Canal passes through the city, separating the east from west. Akron has the only biogas facility in the United States that produces methane through the decomposition process of sludge to create electricity.

Akron has a humid continental climate winters are cold and dry but typically bring a mix of rain, sleet, and snow with occasional heavy snowfall and icing. January is the coldest month with an average mean temperature of 26.1 °F (−3.3 °C), with temperatures on average dropping to or below 0 °F (−18 °C) on 3.8 days and staying at or below freezing on 41 days per year. Snowfall in Akron averages 47.5 inches (121 cm) per season, significantly less than the snowbelt areas closer to Lake Erie. The snowiest month on record was 37.5 inches (95 cm) in January 1978, while winter snowfall amounts have ranged from 82.0 in (208 cm) in 1977–78 to 18.2 in (46 cm) in 1949–50. Springs generally see a transition to fewer weather systems that produce heavier rainfall. Summers are typically very warm and humid with temperatures at or above 90 °F (32 °C) on 8.0 days per year on average; the annual count has been as high as 36 days in 1931, while the most recent year to not reach that mark is 2004. July is the warmest month with an average mean temperature of 72.0 °F (22 °C).  Autumn is relatively dry with many clear warm days and cool nights.