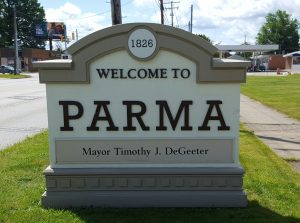 Parma was originally known as Township 6, Range 13 of the Western Reserve. With institutions such as Case Western Reserve, you may recognize the name. Much of the Greater Cleveland area (and Northeastern Ohio) was included in the Connecticut Western Reserve, land granted to the Colony of Connecticut under the terms of its charter by King Charles II. After the American Revolutionary War, Connecticut sold much of the reserve to a group of speculators who in turn sold it in portions for development by new settlers. The first settlers arrived in 1816. The Parma area was once called Greenbrier after the many thorny bushes in the area.

Early settlers had to clear out these bushes and woods to build on the land. The first settler was a merchant who opened an inn and tavern. Eventually, a doctor from Cleveland visited Parma, Italy and was so impressed with it he persuaded the people of Greenbrier to change the town’s name. In 1842 there were so many bears, wolves and rattlesnakes destroying farm animals and crops in Parma that a hunting party had to be organized. In 1912, a portion of Parma broke off and became Parma Heights. Some say that this may have been because of the Temperance Movement against the use of alcohol. Parma had a lot of taverns and inns (even then!) and perhaps the people of Parma Heights wanted to form their own community. If you look around today you see the city came around. After WW2, many soldiers came home to Parma to raise their families.

The 40s and 50s saw industrial growth with the construction of the General Motors Chevrolet Plant. In 1950 Parma’s population was 28,000, but tripled to more than 82,000 by 1960. Many shopping plazas popped up, as well as Parmatown Mall and Parma Community General Hospital. Parma soon became not only one of the fastest-growing cities in Ohio, but in the United States! Parma has more than 34,000 homes, but the oldest is the Henninger House built in 1849. It’s still standing near the corner of Broadview and Snow. Philip and Sophia Henninger came to the United States from Germany, had 10 children and are buried at St. Peter’s Church Cemetery on Broadview Road. The Parma School district encompasses Parma, Parma Heights and Seven Hills, making it the 11th largest in Ohio with close to 20 schools. Many have been standing for decades: Thoreau Park Elementary 1926, St. Charles Elementary School 1924, Parma Senior High School 1853, Normandy High School 1968, Padua High school 1961, Tri-C 1966. After WW1, many Germans came to the United States and settled in Cleveland. In 1924, they established the German Central Organization, which purchased land in 1926 that became a farm and is still used today for many recreational activities including weddings, fish frys and the group’s fabulous Oktoberfest! While many settlers of Parma were of German descent, over time the city has become a mix of cultures including Ukrainian, Polish, Italian and Irish.