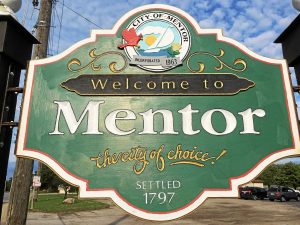 The Mentor Lagoons had its origins as part of the Mentor Marsh more than 1,000 years ago. The largest remaining marsh in Lake County, Mentor Marsh is located in what was once the channel of the Grand River. At one point in time, there existed a large estuary where the Grand River flowed into Lake Erie. It is believed that the Grand River’s course changed to a more direct flow rather than flowing northwestwardly to the lake. Without the cleaning action of the river’s flow, the abandoned channel evolved into the marsh. At the eastern end of the marsh is Headlands Beach State Park. This park includes a state nature preserve, the Shipman Wildlife Pond, and parking facilities sufficient enough to handle large numbers of visitors.

The residential section between Lake Erie and the Mentor Marsh is known as the Headlands community; a large residential area, which includes a fire station, two elementary schools, and a small retail center. The western end of the Marsh flows directly into the Mentor Lagoons. The history of plans to develop the marsh area date to the latter part of the nineteenth century. In the 1870’s a plan was developed to dredge the marsh channel and build an inland dock to hold grain shipped in at a cheaper rate than the railroads were charging to haul it. This plan was made null and void by the enactment of the Granger Laws in 1874, which established maximum rates that the railroads could charge for freight. In 1900, a plan was formulated to develop the marsh into a port for coal and iron ore shipping. Rapid changes in the steel industry and one landowner’s refusal to sell his property stopped this project and instead forced U.S. Steel to develop in Lorain, Ohio, located west of Cleveland.

The recreational use of property located adjacent to Lake Erie had been popular since the 1870’s as evidenced by the development of several beach clubs in the Mentor area. Speculative land development beginning in the 1920’s reflected this recreational perspective and resulted in the layout of the Headlands community. The small parcel lots, most of them approximately 50 feet wide by 150 feet deep, were later more fully developed with relatively small homes in the postwar building boom of the later forties and early fifties. In 1924, a group of relatively well to do Clevelanders spent over one million dollars to develop the Lagoons area into a “Venice of the North”. The current system of Lagoons were constructed and a subdivision containing elaborate homes, a small boating port, and an access road to the Lagoons were proposed. A bridge was partially constructed at Mentor Harbor Boulevard, but the accompanying road connection was never built. The development project was ended by the 1929 stock market crash. The bridge has since become known to locals as “the bridge to nowhere”.