Have you spotted foundation wall cracks in your home? Cracks are one of the first signs of foundation issues. Some cracks indicate a compromise in the structural integrity of your home. Other cracks are not as serious. However, they can result in other problems such as moisture seepage.

The following are some types of foundation wall cracks to look out for.

These cracks run from the top of the wall to the bottom or vice versa. They usually do not slant to either side. If they are angled, this is not more than 30 degrees.

These cracks are often the result of tension on the foundation. Concrete foundations are strong under compression. However, they crack easily under tension. 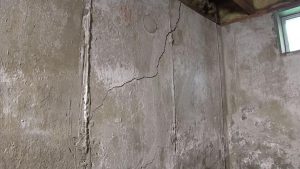 In many cases, these cracks aren’t a cause for concern when it comes to the structural integrity of the home. They are often the result of shrinkage. However, there are instances when they are the result of settling of the foundation.

The cracks can result in water seepage issues. They should, therefore, be sealed with epoxy or urethane. If your foundation repair contractor identified other signs of settling, this should be dealt with to prevent further cracking.

These cracks run from the top to the bottom of the wall or vice versa. However, unlike vertical cracks, they are angled from vertical at anything between 30 and 75 degrees. These cracks can be narrow hairline cracks or wide structural cracks.

Depending on the underlying cause of the cracks, these cracks may be repaired by crack injection. Underpinning and other repair methods to straighten and support the foundation may also be used to prevent further damage.

These cracks often appear toward the middle of the wall. They run horizontally. They are the result of increased hydrostatic pressure acting against the wall. This leads to foundation failure.

Repairing these cracks requires reinforcing the wall. Carbon fiber straps are the most common method used to do this. You will also need to relieve the hydrostatic pressure against the wall. This may be done by installing a French drain.