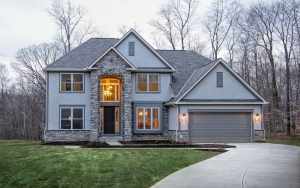 In 1797, Charles Parker, a surveyor with the Connecticut Land Company, built a cabin on the marsh paving the way for other pioneers to establish this new land called the Western Reserve Territory. By 1811, Charles moved on to settle Milan, Ohio, but his younger brother, Clark would spend the rest of his life here. He married Margaret Jordan (whose family settled Concord Township) and they raised 13 children. Part of their property on Mentor Avenue was donated to the newly-established Mentor Methodist Church. Many of Mentor’s first settlers are buried at Mentor Cemetery. The name Mentor originated in Greek literature; Mentor was the tutor of Telemachus, the son of Odysseus. Other place names in the Western Reserve, including Solon, Euclid and Macedonia, were also inspired by the early Americans’ fascination with the ancient world.

According to advertisements and rumors that spread from farmhouse to village, this new land in the West was not a grim wilderness, but Eden itself, an earthly Paradise where the ground was level and fertile and the climate mild.The pioneers traveled mostly by horse and covered wagon loaded with every possession — a bed, a chest, some quilts and featherbeds, a trunk full of clothing, and, of course, the family Bible. They also brought with them a sense of community that resulted in the quick establishment of churches, schools and libraries. Over the years, this young farming community grew. Foot trails became roads. Farmlands gave way to nurseries. Ultimately, Mentor became the major commercial center that we know today.