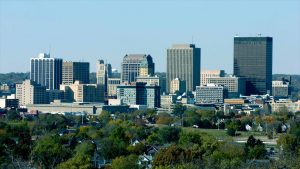 Akron is located in the Great Lakes region about 39 miles (63 km) south of Lake Erie, on the Glaciated Allegheny Plateau. It is bordered by Cuyahoga Falls on the north and Barberton in the southwest. It is the center of the Akron Metropolitan Statistical Area which covers Summit and Portage Counties, and the larger Cleveland-Akron-Elyria Combined Statistical Area. Located on the western end of the plateau, the topography of Akron includes rolling hills and varied terrain. The Ohio and Erie Canal passes through the city, separating the east from west. Akron has the only biogas facility in the United States that produces methane through the decomposition process of sludge to create electricity. According to the 2010 census, the city has a total area of 62.37 square miles (161.5 km2), of which 62.03 square miles (160.7 km2) (or 99.45%) is land and 0.34 square miles (0.88 km2) (or 0.55%) is water.

Akron has a humid continental climate (Köppen Dfa), typical of the Midwest, with four distinct seasons, and lies in USDA hardiness zone 6b, degrading to zone 6a in the outlying suburbs. Winters are cold and dry but typically bring a mix of rain, sleet, and snow with occasional heavy snowfall and icing. January is the coldest month with an average mean temperature of 26.1 °F (−3.3 °C), with temperatures on average dropping to or below 0 °F (−18 °C) on 3.8 days and staying at or below freezing on 41 days per year. Snowfall averages 47.5 inches (121 cm) per season, significantly less than the snowbelt areas closer to Lake Erie. The snowiest month on record was 37.5 inches (95 cm) in January 1978, while winter snowfall amounts have ranged from 82.0 in (208 cm) in 1977–78 to 18.2 in (46 cm) in 1949–50. Springs generally see a transition to fewer weather systems that produce heavier rainfall. Summers are typically very warm and humid with temperatures at or above 90 °F (32 °C) on 8.0 days per year on average; the annual count has been as high as 36 days in 1931, while the most recent year to not reach that mark is 2004. July is the warmest month with an average mean temperature of 72.0 °F (22 °C). Autumn is relatively dry with many clear warm days and cool nights.

Akron is home to E. J. Thomas Hall, one of three Akron performance halls. Regular acts include the Akron Symphony Orchestra, Tuesday Musical Club, and Children’s Concert Society. World-class performances events include Broadway musicals, ballets, comedies, lectures, entertainers, attracting 400,000 visitors annually. The hall seats 2,955, divided among three tiers. To maintain top-notch acoustic sound, the counter-weighted ceiling is adjustable, altering the physical dimensions of the hall. Located downtown is the Akron Civic Theatre, which opened in 1929 as the Loew’s Theater. This atmospheric-style theater was designed by John Eberson and contains many Moorish features including arches and decorative tiles. It features elaborate wood carvings, alabaster statuary, and European antiques. The theater seats 5,000. Behind it on the canal is the Lock 3 Park amphitheater, which annually host the First Night in Akron. The Akron Art Museum also downtown, features art produced since 1850 along with national and international exhibitions. It opened in 1922 as the Akron Art Institute, in the basement of the Akron Public Library. It moved to its current location at the renovated 1899 post office building in 1981. In 2007, the museum more than tripled in size with the addition of the John S. and James L. Knight Building, which received the 2005 American Architecture Award from the Chicago Athenaeum while still under construction.

Built between 1912 and 1915 for Frank Seiberling, Stan Hywet Hall and Gardens is the seventh-largest historic house in the United States. Located within the Sand Run Metro Park, the 104 acres (0.42 km2) F.A. Seiberling Nature Realm features a visitor center, hiking trails, three ponds, gardens, and an array of special programs throughout the year. The Akron Police Museum displays mementos including items from Pretty Boy Floyd, whose gang frequented the city. The city is home to several other galleries and museums include American Marble and Toy Museum and the Don Drumm Studios & Gallery.