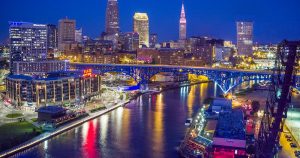 As one of thirty-six founders of the Connecticut Land Company, General Moses Cleaveland was selected as one of its seven directors and was subsequently sent out as the company’s agent to map and survey the company’s holdings. On July 22, 1796, Cleaveland and his surveyors arrived at the mouth of the Cuyahoga River. Cleaveland quickly saw the land, which had previously belonged to Native Americans, as an ideal location for the “capital city” of the Connecticut Western Reserve. Cleaveland and his surveyors quickly began making plans for the new city. He paced out a nine-and-a-half-acre Public Square, similar to those in New England. His surveyors decided upon the name, Cleaveland, after their leader. In October, Cleaveland and his staff returned to Connecticut where he pursued his ambition in political, military, and law affairs, never once returning to the settlement he established. Schoolteachers Job Phelps Stiles (born c. 1769 in Granville, Massachusetts) and his wife Talitha Cumi Elderkin (born 1779 in Hartford, Connecticut) were two of only three original settlers who stayed there over the first winter of 1796–1797 when, attended by Seneca Native American women, Talitha Cumi gave birth to Charles Phelps Stiles, the first white child born in the Western Reserve. They lived at first on Lot 53, the present corner of Superior Avenue and West 3rd Street adjacent to the Terminal Tower, but later moved southeast to higher ground in Newburgh, Ohio to escape malarial conditions in the lower Cuyahoga Valley. The village of Cleaveland was incorporated on December 23, 1814; one of its notable early citizens was Lorenzo Carter, who made Cleveland a solid source for trade. He also built a large log cabin for newcomers to settle in. The spelling of the city’s name was changed in 1831 by The Cleveland Advertiser, an early city newspaper. In order for the name to fit on the newspaper’s masthead, the first “a” was dropped, reducing the city’s name to Cleveland. The new spelling stuck, and long outlasted the Advertiser itself.

Though not initially apparent — the city was adjacent to swampy lowlands and the harsh winters did not encourage settlement — the location proved providential. The city began to grow rapidly after the completion of the Ohio and Erie Canal in 1832, turning the city into a key link between the Ohio River and the Great Lakes, particularly once the city railroad links were added. In 1822, a young, charismatic lawyer and politician, John W. Willey came to Cleveland and quickly established himself within the city. He became a popular figure in local politics and wrote the Cleveland Municipal Charter as well as several of the city’s original laws and ordinances. Willey was then elected the first mayor of Cleveland for two terms. With James Clark and several others, Willey bought a section of the Flats with plans to transform it into Cleveland Centre, a business and residential district. Willey then bought a piece of land from the southeast section of Ohio City across from Columbus Street in Cleveland. Willey named the new territory Willeyville and subsequently built a bridge connecting the two sections, calling it Columbus Street Bridge.

The bridge siphoned off commercial traffic to Cleveland before it could reach Ohio City’s mercantile district. This action aggravated citizens of Ohio City, and brought to the surface a fierce rivalry between the small city and Cleveland. Ohio City citizens rallied for “Two Bridges or None!”. In October 1836, they violently sought to stop the use of Cleveland’s new bridge by bombing the western end of it. However, the explosion caused little damage. A group of 1,000 Ohio City volunteers began digging deep ditches at both ends of the bridge, making it impossible for horses and wagons to reach the structure. Some citizens were still unsatisfied with this and took to using guns, crowbars, axes, and other weapons to finish off the bridge. They were then met by Willey and a group of armed Cleveland militiamen. A battle ensued on the bridge, with two men seriously wounded before the county sheriff arrived to end the violence and arrest many. A court injunction prevented further confrontations which may have led to an all out war between Cleveland and Ohio City. The two cities eventually made amends and Ohio City was annexed by Cleveland.