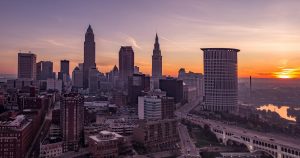 Cleveland was established on July 22, 1796 by surveyors of the Connecticut Land Company when they laid out Connecticut’s Western Reserve into townships and a capital city. They named the new settlement “Cleaveland” after their leader, General Moses Cleaveland. Cleaveland oversaw the New England-style design of the plan for what would become the modern downtown area, centered on Public Square, before returning home, never again to visit Ohio. The first permanent settler in Cleaveland was Lorenzo Carter, who built a cabin on the banks of the Cuyahoga River. The Village of Cleaveland was incorporated on December 23, 1814. In spite of the nearby swampy lowlands and harsh winters, the town’s waterfront location proved to be an advantage, giving it access to Great Lakes trade. It grew rapidly after the 1832 completion of the Ohio and Erie Canal. This key link between the Ohio River and the Great Lakes connected it to the Atlantic Ocean via the Erie Canal and Hudson River, and later via the St. Lawrence Seaway. Its products could reach markets on the Gulf of Mexico via the Mississippi River. The town’s growth continued with added railroad links. In 1831, the spelling of the town’s name was altered by The Cleveland Advertiser newspaper. In order to fit the name on the newspaper’s masthead, the editors dropped the first “a”, reducing the city’s name to Cleveland, which eventually became the official spelling. In 1836, Cleveland was officially incorporated as a city. That same year, Cleveland, then only on the eastern banks of the Cuyahoga River, nearly erupted into open warfare with neighboring Ohio City over a bridge connecting the two communities.

Ohio City remained an independent municipality until its annexation by Cleveland in 1854. Cleveland witnessed rapid growth after the American Civil War. The city’s prime geographic location as a transportation hub between the East Coast and the Midwest played an important role in its development as a commercial center. Cleveland served as a destination for iron ore shipped from Minnesota, along with coal transported by rail. In 1870, John D. Rockefeller founded Standard Oil in Cleveland. In 1885, he moved its headquarters to New York City, which had become a center of finance and business.

By the early 20th century, Cleveland had emerged as a major American manufacturing center. Its businesses included automotive companies such as Peerless, People’s, Jordan, Chandler, and Winton, maker of the first car driven across the U.S. Other manufacturers in Cleveland produced steam-powered cars, which included White and Gaeth, as well as the electric car company Baker. Known as the “Sixth City” due to its position as the sixth largest U.S. city at the time, Cleveland counted major Progressive Era politicians among its leaders, most prominently the populist Mayor Tom L. Johnson, who was responsible for the development of the Cleveland Mall Plan. The era of the City Beautiful movement in Cleveland architecture, this period also saw wealthy patrons support the establishment of the city’s major cultural institutions. The most prominent among them were the Cleveland Museum of Art, which opened in 1916, and the Cleveland Orchestra, established in 1918.

Ohio State Home Services has provided quality service with over 80,000 successful waterproofing and foundation repair installations and satisfied customers since our inception in 1978. Ohio State Home Services’ philosophy for success is to provide honest, courteous and guaranteed service to every customer. Our reputation reflects this. Our well-trained waterproofing technicians are dedicated to complete customer satisfaction. This is achieved through fast, efficient processes as well as teamwork throughout this organization. You will always find a friendly representative willing to meet your needs at Ohio State Home Services. We are a full-service company that handles problems ranging from patching cracks to rebuilding basements. In addition, we hold three patents related to waterproofing that makes us unique in the industry. These patents and our experience allow us to be able to do what every other waterproofer can do, but no one else can do what we do. We are actively involved in the industry and community, including the National Association of Waterproofing Contractors, NARI, NAHB, NHIA, the BIA, the FHA and a number of consumer advocacy groups, as well as playing leading roles in a number of charitable functions.

WHERE TO FIND US: