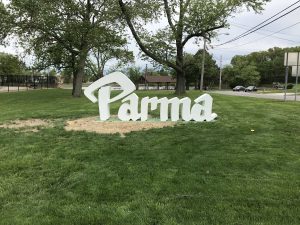 In 1806, the area that would eventually become Parma and Parma Heights was originally surveyed by Abraham Tappan, a surveyor for the Connecticut Land Company, and was known as Township 6 – Range 13. This designation gave the town its first identity in the Western Reserve. Soon after, Township 6 – Range 13 was commonly referred to as “Greenbriar,” supposedly for the rambling bush that grew there. Benajah Fay, his wife Ruth Wilcox Fay, and their ten children, arrivals from Lewis County, New York, were the first settlers in 1816. It was then that Greenbriar, under a newly organized government seat under Brooklyn Township, began attending to its own governmental needs.

By 1850, the US census listed Parma Township’s population at 1,329. However, the rising population of the township had slowed over the decades. The Civil War affected Parma much as it did other towns and villages in the nation. Three out of four homes sent a father, sons, or sometimes both, to fight in the war. By 1910, the population of the township had increased to 1,631. In 1911, Parma Heights, due to the temperance mood of the day, separated itself from the Parma Township after by a vote of 42 to 32 and was incorporated as a village comprising 4.13 square miles. By 1920, the US census showed Parma Township had a population of just 2,345, but the following decade proved to be a time of significant growth and development for Parma. It was in the 1920s that Parma Township transformed from a farming community into a village. On December 15, 1924, Parma was incorporated as a village. The largest and fastest growing development of that time was H. A. Stahl’s Ridgewood Gardens development, which started in 1919, continued through the 1920s, and into the 1930s. A resident of Shaker Heights, Ohio’s first Garden City, H. A. Stahl developed Ridgewood as an ambitious “model village” project patterned along the lines of and rivaling the earlier Shaker Heights project with “churches, schools, motion picture theater, community house, and other features forming a part of all well-developed residence communities.” Ridgewood was designed and marketed as a Garden City on 1,000 acres of land to accommodate about 40,000 residents “325 feet above Lake Erie, in the healthiest section of the South Side, free from the smoke of industries, or the congestion and noises of sections nearer the Public Square.”

On January 1, 1931, Parma became a city with a population of 13,899. Whereas the incorporation of the village of Parma was met with much optimism, the newly established city of Parma faced the uncertainty of the Great Depression which had almost entirely stopped its growth. Money was scarce, tax income was limited, and some began to talk of annexation of both the city and school district to Cleveland. Both annexation issues, however, were soundly defeated as Parma voters overwhelmingly voted against them and silenced proponents of annexation. Not long after this, Parma was once again solvent due in large part to the newly created Gallagher Act and the determination of Parma’s Auditor, Sam Nowlin. By 1941, a building boom appeared to be underway in Parma just as the United States was about to enter World War II. After World War II, Parma once again began to experience tremendous growth as young families began moving from Cleveland into the suburbs. Between 1950 and 1960, Parma’s population soared from 28,897 to 82,845. By 1956, Parma was unchallenged as the fastest growing city in the United States. The population peaked in 1970 at 100,216. In 2016, Parma’s population had declined to 81,601, though it remains one of the Cleveland area’s top three destinations young adults (aged 22 to 34) are increasingly
choosing as a place to live, along with Lakewood and downtown Cleveland and in 2016 was recognized by Businessweek as one of the best places to raise kids in Ohio.